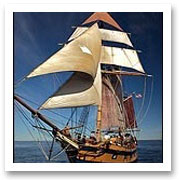 According to Grays Harbor Historical Seaport:

"The topsail ketch Hawaiian Chieftain is a replica of a typical European merchant trader of the turn of the nineteenth century. Her hull shape and rigging are similar to those of Spanish explorer's ships used in the expeditions of the late 18th century along the Washington, Oregon, and California coasts. Built of steel in Hawaii in 1988 and originally designed for cargo trade among the Hawaiian Islands, her design was influenced by the early colonial passenger and coastal packets that carried on coastal trade along the Atlantic coastal cities and towns."

Tours will take place for school groups every weekday and public tours and adventure sails for a couple of hours each evening and on weekends.

The Rest of the Story about the History of Hawaiian Chieftain...

A successful trader has a strong drive for success.

Your blog is actually unique. Many thanks for that!

As you might expect, about half goes to the dining staff, the rest to room attendants; recommended daily values range.

Spanish explorer's ships used in the expeditions of the late 18th century along the Washington, Oregon, and California coasts.

Wow! I can't believe I missed that! I was travelling there three years ago, and I didn't know about it! I'm going this summer to visit the west coast again, and I bumped into your post searching for things to do... maybe sometime in the future..