Fairfield California Is All About Discovery

Solano County history dates back thousands of years.  Artifacts of stone-age people have been found in Green Valley that date back to 2000 B.C.E.  When the Spaniards arrived, Solano County was home to the Patwin Indians.  Some of their village places have survived phonetically in such modern places as Suisun, Soscol, Ulatis and Putah.

Four years after the California Bear Flag Revolution, February 18, 1850, the boundaries of Solano County were set by the first elected legislature of the territory of California, making Solano County one of the original 27 counties. The county derives its name indirectly from that of the Franciscan missionary, Father Francisco Solano, whose name was given in baptism to the chief of one of the Indian tribes of the region. Before receiving the name Solano, the chief was called Sem Yeto, which signifies "brave or fierce hand." At the request of General Vallejo, the county was named for Chief Solano, who at one time ruled over most of the land and tribes between the Petaluma Creek and the Sacramento River.

Fairfield, California History
Fairfield was founded by clipper-ship captain Robert Waterman, and named for his hometown of Fairfield, Connecticut. In 1858, voters ratified a proposal to move the county seat from Benicia to Fairfield. As promised, Waterman donated 16 acres for new county buildings and in 1860 a brick county courthouse and jail were constructed. The city of Fairfield was formally incorporated in 1903 and celebrated their Centennial in 2003.

In 1942, Travis Air Force Base was built east of Fairfield providing a tremendous boost to the local

economy, which continues today. Travis Air Force Base became one of the major departure points for military units heading for combat in Vietnam. The base was annexed to Fairfield on March 30, 1966.

Fairfield is the home to a diverse industrial and commercial sector, employing workers in a variety of professional fields such as manufacturing, health care, hospitality, agriculture, active military duty, and retail. Major employers include Travis Air Force Base, County of Solano, Westfield Solano Mall, Anheuser-Busch, and Jelly Belly Candy Co.

Fairfield is home to a variety of special events including an annual Tomato Festival and Vezér Stock Concert Series. Fairfield offers ample opportunities for hiking, biking, picnics and other outdoor activities at a variety of parks. The city boasts 18 parks and recreation centers including Linear Park, a trail converted from an old railroad line and now part of the Rail-to-Trails Conservancy. Primarily a commuter route that leads from downtown Fairfield to the Solano Community College, the trail runs through a landscaped greenbelt featuring small playgrounds and benches. Rockville Hills Regional Park, the largest regional park in Solano County with more than 600 acres is a favorite with Bay Area and Central Valley mountain bikers.

Solano. The two Fairfield golf courses were voted #1 and #2 in Solano County for six consecutive years and are rated in the Zagat Survey. Paradise Valley and Rancho Solano are conveniently located midway between San Francisco and Sacramento making them accessible from all cities in the Bay Area and greater Sacramento areas and a perfect location for corporate or large events, or just a day trip.

Paradise Valley, praised as being the number one golf course in Solano County and best value in the North Bay area, has a spectacular layout that is enhanced by oak studded fairways and meandering creeks. It’s a favorite for golfers who enjoy a walking round of golf and is playable for golfers of all abilities. Rancho Solano, known for having a beautiful country-club-like setting, has an alluring layout with hilly terrain and undulated greens that add character to the golf course. Scenic lakes, elevated tees and well placed bunkers provide interesting features that contribute to the excitement of playing this course.

Fairfield is less than an hour from the greatest urban and rural settings in California: San Francisco, Oakland, Sacramento, California Delta, and Napa and Sonoma valleys.  Stay and play, or tour the region – either way, Fairfield is the perfect “base camp” for a vacation of wonderful discoveries.  For more information, visit Fairfield Tourism Association at www.CaliforniaFairfield.com or call (877) 7WE-RFUN.

Seek and ye shall find all that is bountiful. A short drive past housing, shopping, and golf 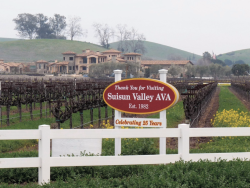 developments you’ll find Suisun Valley’s bucolic lifestyle. Sometimes you have to be willing to take a chance; take the road less traveled. One of these unexpected places, Suisun Valley, is less than 50 miles west of Sacramento or San Francisco, off Interstate 80 near Fairfield. Driving past the suburban and urban elements of the city and, suddenly, spread-out before you is rural California…a beautiful valley bounded by two coastal ranges. There are a handful of vineyards and wineries with tasting rooms in the Suisun Valley appellation – classified as an American Viticulture Area (AVA) by the federal government since 1982 – and wonderful produce stands.  Local art at The Clay Station and culinary delights are waiting at the Mankas Steakhouse in beautiful downtown Mankas Corner.

Suisun Valley’s wine region is small but mighty. Just a handful of tasting rooms are open to the public, but what they lack in numbers they make-up in quality and hospitality. You won’t find anyone but the 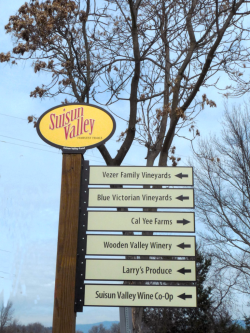