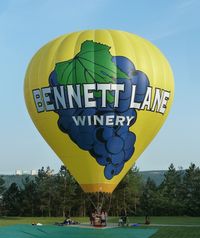 Up, Up, and Away in Napa Valley! But first, name that balloon.

You don't want to miss this incredible opportunity. Bennett Lane Winery has announced the launch of their “Name the Bennett Lane Balloon” contest, in which the winery’s fans, followers and members of the public of legal drinking age are invited to submit names for Napa Valley's first winery branded hot air balloon via social media. Winery owners Randy and Lisa Lynch will choose the winning name, which will be announced at the balloon’s official launch on Wednesday, August 15th, as well as on the winery’s website, Facebook and Twitter accounts. The person who submits the winning name will receive several fantastic rewards, including an hour-long flight for two over Napa Valley in the new balloon, a complimentary reserve wine tasting, and a sleek, fitted black jacket and hat emblazoned with the Bennett Lane Winery logo.

Contest entries for the name are submitted on the winery’s website. Participants and the public are invited to keep up with the contest by visiting the winery's Facebook fan page, and by following Bennett Lane Winery on Twitter at @BennettLane and searching for the #nametheballoon hashtag.

The contest will be closed for submissions at 5 pm on Sunday, August 12th. The winning name will be announced by special guest, baseball legend Tony La Russa, at the balloon launch on August 15th.