« AFTER THE AMGEN TOUR OF CALIFORNIA | Main | California: The Journey to the Center of the World »

California: Travel to the Center of the World Begins 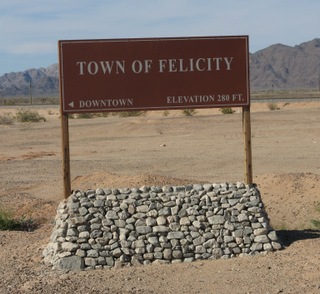 Nearly 18 years ago I went to work at the California Office of Tourism and began a love affair with California. Lots of interesting people would call with all kinds of issues, but one such memorable call came from a gentleman by the name of Jacques-Andre Istel.

Mr. Istel was calling, upset, that the new California state map DID NOT include his town of Felicity, California! Felicity....the recognized "Center of the World!" Now I was new to my job and really didn't know what to make of this. Mr. Istel wanted to speak to our Director because, as Mayor of Felicity, he intended to have this grievous wrong righted. So I'm thinking this is the craziest thing I have ever heard.

I don't recall much more than that, but I can tell you that Felicity, California -- Center of the World -- has been on the official California state map ever since. What I can also tell you is that I never forgot the conversation. And ever since that day, I have been waiting to visit Felicity.

That was in 1990. I never spoke with Mr. Istel again until 2007. I was heading for southern California and hoping to visit Felicity, the Center of the World. I had no real idea about the location, but Mr. Istel quickly told me that by late March it's pretty hot in the southeastern corner of California and they leave for cooler locales. He said they would return around Thanksgiving and I could visit after that.

OR, he went on to tell me, they would be dedicating the Hill of Prayer on March 7, 2008 and that would be an exciting time to visit.