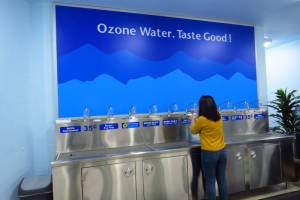 “This location has high-visibility,” said project manager, Amy Wongso. “Good traffic and nearby Asian and Latino communities–our target market—made this a good investment.”

With more than 300 stores, Biru has grown to be the leading refill water company in Indonesia and has received multiple awards such as WORLDCOB’s “The Bizz 2017” Business Award and Asia Pacific Entrepreneurship Award 2013. “We focus on what we do best, Water is the business!”

Biru has been closed since 2020 due to Covid. So happy to see them open and serving the community.

Memories from my Tin Box of Poetry & Prose. I continue to find the stories scribbled ink on paper. These will be with me always.

An adventure in every way. Traveling to new places, meeting new people, taking part in a piece of Americana - a cattle drive. What else? 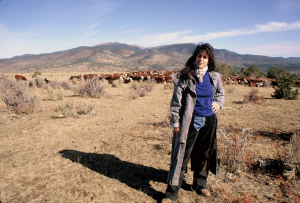 The drive to Bridgeport was fantastic. I had never been beyond Lake Tahoe. Venturing into Nevada and driving through open valleys lined with tumbleweed, surrounded by omnipotent Sierra mountains capped with snow and shrouded by dark clouds. The aspens were a shade of yellow that only unseen powers could create. After passing Lake Tahoe, we dropped down into the Carson Valley - flat and wide-open. The sun was shining on a few chosen spaces. Farther along was Topaz Lake. Just beyond, we crossed back into California. The land was mostly scrub and brush with jagged hills on either side. A small stream, a lovely cascade of water and rocks, shadowed the road. The sky was still cloudy with breaks of sunlight.

The people on the cattle drive have been amazing and made me feel a part of this longstanding gathering. CJ Hadley, a British writer living in Washoe Valley, dressed me out in her suede chaps and her Australian outback coat. Terry Sullivan, a classic cowboy, tied his flowery neckerchief around my neck. With CJ's hat resting on my head, I was transformed into the complete cowgirl. The ultimate show of generosity was CJ letting me ride her horse, Gibson. And so, on our second day on the trail, I rode into Sweetwater Ranch with an extraordinary family of cowboys: Terry Sullivan, David Roundtree, Glenn Allaback, John Ascuaga, and Richard Houle, Chef gone cowboy for a day. We rode on through a majestic valley ringed on all sides by the Sierra Nevada with 900 head of cattle keeping pace. 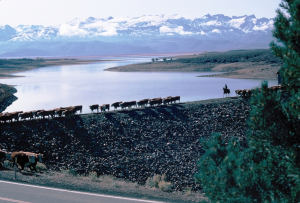 The next day started with another of Richard's heartfelt meals - steak and eggs, home fries, toast, coffee, and a smile. The world was icy; nighttime temperatures had dipped to a chilly 15 degrees. Bridled and saddled, the horses' tails, manes, whiskers, and eyelashes were tipped in a frosty white. One restless pony pranced feverishly in the corral. Certainly she would not be left out of the day's journey. And she wasn't. 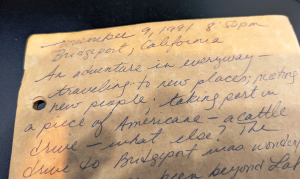 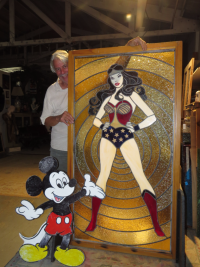 Mickey Abbey, a Sacramento native, and Midtown dweller started his stained glass art business more than 45 years ago at 18th and L streets. Next door to Mario’s Italian Cellar, now Crepeville, Custom GlassWorks By Mickey survived changing times, while other familiar Sacramento haunts faded away. Mickey’s Wonder Woman (circa 1982) which graced the Crocker Museum and the glass canopy over Kupro’s Craft House are Midtown landmarks.

In his own words:  "I took a painting class at San Francisco State and discovered my art DNA. After four years working in Macy’s Union Square display department, I returned to my Sacramento roots. You come home because it’s comfortable.  Back in the day, Midtown was happening. We were just a group of guys doing a craft shop – Beginning – with woodwork, metal, sculpture, and stained glass.  There was nothing else down here at that time.

I have come full circle doing today what I did in the '70s. Work and live in my studio, the doors open, impromptu music. It hasn‘t changed much. There weren't so many people living down here and everyone gathered at a handful of places – most no longer exist. Now, the choices are unlimited." 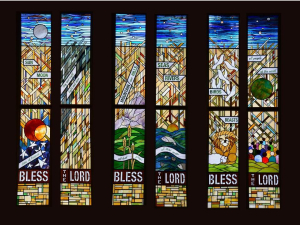 Never one to be idle, Mickey continues to create and share his art. Now more than ever. A recent commission of 12 stained-glass windows at St. Perpetua Church in Lafayette, California, pays witness to his incredible talents. Thousands of pieces of glass - cut by hand - were painstakingly assembled into this Biblical display. Each panel is 2 feet by 6 feet and stacked to make six total windows 2 feet by 12 feet. All about creation and the people of the Earth. Months of worrying - something Mickey never does - were finally installed in time for Easter Sunday, April 17, 2022. St. Perpetua's Reverend John Kasper who commissioned Mickey, we heard, wept when first viewing windows fully installed.

With more projects waiting in the wings, this is certainly not Mickey's swan song but it will be hard to top and guarantees he won't have to wait at the Pearly Gates. Saint Peter will be there ready to let him in.

He was emotionally involved and his head has swelled a size or two.

If my Subaru can't get me there, that's a good reason not to go!